The Musée des Beaux Arts in Rouen is re-opening on 11 July (all being well of course) with several exhibitions, one of which on impressionism was recently reviewed in the Financial Times. See here for details.

The This is England festival of British-made short films is planned to run this year from 14 - 22 November in Rouen. The festival is organised by members of the Rouen-Norwich-Club and this year is the ninth edition. 80 films have already been sent in and the programme will be announced in the middle of July. We have to wait and see if the festival is able to go ahead. The organisers are always pleased to see members of the NNRFA.
A message to our friends in Rouen - we send our thoughts and best wishes to you all in these difficult and challenging months. See the Rouen-Norwich-Club website for their message and a video clip of 'silent' Rouen.

The latest Rouen magazine is here to read - in French.
UEA annual staff/student French drama production, March 2020 - Voltaire's Candide --- CANCELLED  -- Maybe at a later date
We live, according to Voltaire’s idealist philosopher Pangloss, ‘in the best of all possible worlds’. His naïve pupil Candide is precipitated on a round-the-world tour of glamorous locations. Disasters of every kind greet him almost everywhere, as he ploughs resolutely on in search of his object of desire, Cunégonde. Sacré's 2020 production turns Candide’s encounter with hell and high water into a musical tour de faiblesse, buoyed up by a scintillating live soundtrack of suitably adapted world music.
Another French conversation group in Norwich
The Louis French Conversation Group (formerly of Louis Deli/Les Garrigues) meets at 3pm every Monday at the Merchants House, Fye Bridge Street. A friendly, relaxed group of mixed levels. Just come along, buy a drink and join in.

The Normandy tourist board has sent out a taste of what's on in 2020.
A French conversation group meets on alternate Saturdays at the Will and Flo pub on the Unthank Rd, Norwich. Fortnightly from 10.30 am. A friendly group of mixed levels. See  https://m.facebook.com/Frenchconversationgroupnorwich/
Going to Rouen? Don't forget to check out the calender of events (and there's lots on including British contemporary art from the Pinault collection at the Musée des Beaux Arts). See https://en.rouentourisme.com/agenda/
(and don't forget to see what's on in Norwich too - lots coming up this autumn and winter: https://www.visitnorwich.co.uk/
Rouen-Norwich-Club visit Norwich, 2019
30 members of the Rouen-Norwich-Club came to Norwich on Friday 5 July for a four-day visit. Twenty of them had not been to Norwich before. Six stayed in a hotel and the rest were hosted by NNRFA members. The programme included a visit to the twinning garden at All Saints Church Westlegate, Ranworth Broad church and conservation centre, a day to Blakeney for a seal trip and fish and chips, and opportunities to see Norwich and meet members of the NNRFA at various very convivial social events in members' gardens. Despite the late arrival of the coach from Rouen, a few managed to make the launch of Norwich in '59 exhibition at the Museum of Norwich where welcoming speeches were made by the Sheriff of Norwich (Dr Alison Prinsley) and the Director of Museums in English and in French. Four members also met the Lord Mayor on Saturday and joined him in the Lord Mayor's procession. All in all, the 60th anniversary of the Rouen-Norwich twinning has been well celebrated in both cities and there was a very real sense that this twinning will continue, with enthusiasm and ideas coming from both sides. Vive le jumelage!
Norwich on the radio in France
Here's a radio show broadcast on 3 May on French radio station, RCF: www.rouen-norwich-club.com/a-la-decouverte-des-liens-entre-norwich-et-rouen/  You can hear Martine Commessie, Christophe Thierry and Nathalie Le Gendre of the Rouen-Norwich-Club talking about Norwich, the origin of the twinning and This is England festival! 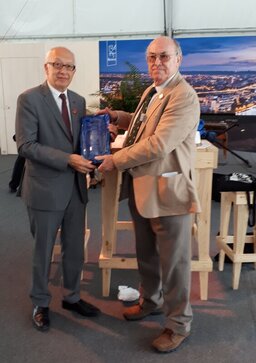 NNRFA Chairman, Chris Rowe, presents M. Yvon Robert, Mayor of Rouen, with an engraved glass vase by Alan Hislop, the Norwich glass engraver
Visit to Rouen, 7 - 11 June 2019
26 members took the trip to Rouen in this our 60th anniversary year. The dates were chosen to coincide with the Armada. Some members stayed with hosts and some in a hotel. On Saturday morning there was a guided tour of historical Rouen. This was appreciated by the members for whom it was their first time. After lunch a visit to the Northmaen Brewery in La Chapelle Saint-Ouen. We were greeted by the owner Dominique Camus “Leo” for a guided tour and tasting of the beers and whiskeys. Some of us purchased a special ale to bring away with us.
On Sunday there was a day excursion to Giverny village, the art gallery and Monet's garden. After lunch at a family-run establishment, Les Nymphéas, we assembled for a visit to Monet’s garden. The famous gardens were especially colourful.

Monday: Armada Day! At 9 am we were invited to take breakfast at the City of Rouen marquee. We met the Maire, M. Yvon Robert and Bruno Bertheuil, Deputy Maire for International Relations and the Armada! We then made our way for what seemed miles to embark on the cruise boat, Lutéce – Belle de Rouen, for a trip on the Seine to see the tall sailing ships from the river. Plenty of time for those with energy to explore the ships moored alongside the quais. At 7 pm, it was cocktail time at the City of Rouen marquee - an enjoyable evening re-acquainting ourselves with our friends.

All agreed that it was a very good visit and Norwich-Rouen ties reinforced! You can see photos of the reception at Rouen-Norwich-Club.
Normandy beer arrives at the City of Ale Festival
Eastern Daily Press covers the voyage of beer by boat from Rouen - see here and here.
Pétanque in Eaton Park, Norwich
Norwich's new pétanque terrain in Eaton Park was inaugurated by the Lord Mayor Martin Schmierer last September - see article in the Eastern Evening News. There are three pistes, so plenty of room for competition. Boules are available from the café for a deposit of £10 or you can take your own. The terrain is near the tennis courts and ping-pong tables.
Amitié IPA
Norfolk Brewhouse's new brew, Amitié IPA, which celebrates the 60th anniversary of our twinning in 2019, was launched at the Norwich City of Ale festival in 2018 with the 'twin' brewers from Normandy present. Here's an article about it by beer writer Roger Prozt: http://protzonbeer.co.uk/features/2018/05/28/viking-beer-cements-norfolk-rouen-link